10 Reasons To Visit This Historic City

By Ruth J. Katz | Photos courtesy of The Montgomery Area Chamber of Commerce

The current film Just Mercy documents the gutsy stand that newly minted, Harvard-educated attorney Bryan Stevenson took back in 1988—appealing the wrongful conviction and death sentence of Walter McMillan, for a murder he had not committed. The movie is gripping and, of course, the lawyer and client triumph. Stevenson went on in 1989 to found the distinguished Equal Justice Initiative (EJI), located in the heart of Montgomery.

EJI is responsible for opening two venues for visitors to experience the inequity and anguish of slavery and to further understand the oppressiveness of incarceration—the spellbinding Legacy Museum and the somber, contemplative National Memorial for Peace and Justice. They are the newest additions to the rich, textured history of the Civil Rights movement in this state capital.

As we honor and celebrate Black History Month, a visit should be on your calendar. And fittingly, the city has just elected its first black mayor, the Honorable Steven Reed. 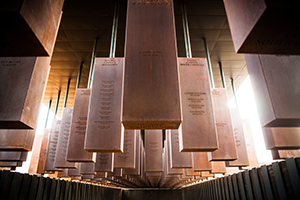 National Memorial for Peace and Justice

1. The Legacy Museum: From Enslavement to Mass Incarceration is a searing study into the agony and injustices perpetrated by slavery as well as an examination of incarceration over the years. The museum is a block from what was the most established slave auction block in the States and is actually on the site where the enslaved were warehoused. The entry corridor underscores the fear and trauma a kidnapped African likely felt, caged in a holding pen. Holographic visions of slaves behind bars, replete with chilling sound effects—in one case, a mournful spiritual—personalize the incomprehensible. Dozens of gallon-size, clear-glass jars hold soil from the sites of Southern lynchings and memorialize the souls who suffered this heinous end, reducing the abstract crime to an individual one: Handy Woodward, March 9, 1886, Russellville, Kentucky.

2. The National Memorial for Peace and Justice is easily reached by shuttle service from the Legacy Museum. This feels like a sacred burial ground, although you will not rest easy here, as you will be moved to tears on this six-acre site. The monument itself is a compilation of stirring, suspended, rectangular (almost casket-like) steel columns; a wall of peaceful, flowing water; and then more tomb-like monuments—over 800 of them, one for each Southern county where racial-terror lynchings occurred, engraved with the names of the victims. (Across the street is an educational facility, the Peace and Justice Memorial Center.) 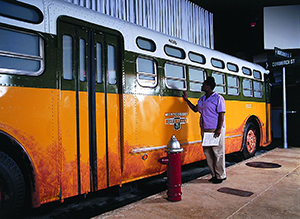 3. Troy University’s Rosa Parks Museum is located near the site where the intrepid Mrs. Parks was arrested for refusing to relinquish her bus seat in 1955. The museum does a splendid job of recreating the period with an introductory film, and then an actual bus takes center stage, with sophisticated audio-video. The Montgomery Bus Boycott lasted 381 days and was highly orchestrated. But make no mistake—this was hard on just about the entire black community. A local dignitary remarks in a film in the exhibit that he had read that shoe repair services increased 45 percent during the boycott! Nearby at Fountain Square is the recently unveiled statue of Mrs. Parks.

4 - 5 The Freedom Riders Museum celebrates the 21 brave young people, barely out of their teens, who challenged the Jim Crow laws of the South. They sought to travel on public transportation from Washington, D. C. to New Orleans, attempting to integrate bus stations, restrooms, and drinking fountains. They arrived at the Montgomery Greyhound Station on May 20, 1961. One member of this group was the highly respected Representative John Lewis, Democrat from Georgia, serving his 17th term in the House. The Harris House, where these brave travelers lodged while in Montgomery, is on the Alabama Register of Historic Places.

6 - 7 Dexter Avenue King Memorial Baptist Church is a National Historic Landmark, and it was in its basement that the NAACP was founded in 1945. Dr. Martin Luther King, Jr. was pastor from 1954 to 1960. The Dexter Parsonage Museum is the modest, mostly untouched home (there is even original furniture) where the King family lived. Imagine the meetings that took place around the dining room table; at one such meeting, the Southern Christian Leadership Conference was formed. 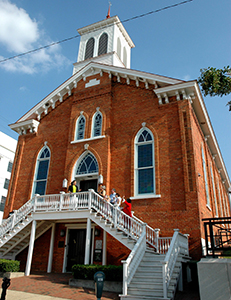 8. The First White House of the Confederacy was the official residence of President Jefferson Davis, while Montgomery served as the capital of the Confederacy (February through May 1861). The 1835 Italianate-style house is listed on the National Register of History Places.

9. The Civil Rights Memorial Center and Memorial, adjacent to the State Capital building (where the 1965 Selma-to-Montgomery Voting Rights March ended), is across from the offices of the Southern Poverty Law Center, and houses moving exhibits about Civil Rights martyrs, a Wall of Tolerance, and a classroom for educational programs.

I could go on with countless more reasons for a trip here. Charting Civil Rights is not the only reason to visit Montgomery. For example, Zelda and F. Scott Fitzgerald spent a year here—and the home they rented is now a small tribute museum—and also functions as an Airbnb. (OK, this is number 10!)