A Style All His Own

Sometimes without even trying you meet an exceptional human being. In my case, it was model/writer/lifestyle ambassador/social media favorite Eric Rutherford. During the worst of the coronavirus pandemic, when I thought the world was ending and took to watching old episodes of Santa Barbara on YouTube to cope (OK, maybe a little bit of scotch too), I found Rutherford’s profile on Instagram (@mr.rutherford) and was intrigued.

Surely, this handsome, camera-melting persona, with the best head of hair, could not be more than a pretty face. But I was wrong. Within a few days I came to find his photos, stories and his “Happy Tuesday” video messages (which he started “because I wanted to use my platform to bring more positivity into the conversation, whether around sobriety, mental illness, or just being your best self,” he says) particularly reassuring. “He’s a true gentleman and a charmer,” says friend Robert Konjic, a fellow male model made famous for a global Gucci campaign. “I love that he uses social media to share his personal experiences to help others.”

To wit: on a recent Tuesday, when everything seemed to go wrong, I turned on a video and found Rutherford talking to the camera and asking how I am doing. How odd. He was addressing his 200,000 + followers, but it felt like he was checking in on me.

KINDNESS & LOVE
Rutherford’s postings during the worst of the virus made the bad days OK and the good days a lot better (though there were few of them). His profile is a hodgepodge of candid photos, throwback memories, messages about social justice (the death of George Floyd and the Black Lives Matter movement affected him profoundly) and fun videos (like getting a haircut), all featuring his trademark smile and positivity. “I value truthfulness, respect, kindness and love,” he says. “Social media can take many shapes, express an unlimited amount experiences, and connect millions of individuals while doing so. We are creating relationships with those people that we follow and who follow us.”

Rutherford is not shy of bearing his soul to his followers, including his issues with addiction. Early in his 20s, he decided he had enough of alcohol. This year, he celebrated 31 years of being sober. “I believe sharing our experiences helps others as much as it helps ourselves,” he told me. “I have always been open about my sobriety, the journey getting there and the steps to staying sober. I believe it is one way of being of service. For some, it is hard to share or be vulnerable with their struggles. I like when people share their stories with me. In AA, it’s called fellowship. We share our experience, strength and hope.”

Unlike most people on social media, Rutherford doesn’t overdo it. He has found the perfect equilibrium of when to share, and when not. Surprisingly, it has not been a strategy, just something that comes naturally. “As much as I have tried to have a consistent plan, I have none,” he says. “There are days when I know very clearly what I am sharing, what time I am doing it and have written the caption the night before. Other days, it’s simply based on emotion. I have great respect for my friends who plan ahead, post it, and move on to the next one without ever overthinking it.” 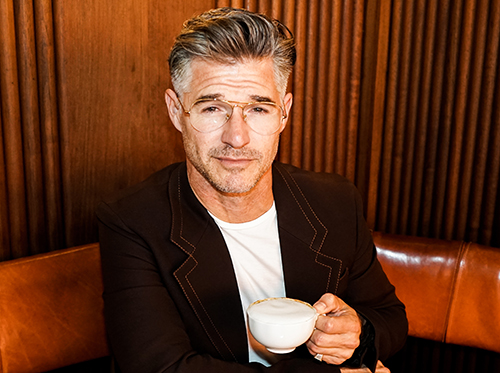 IN FRONT OF THE LENS
Rutherford was born in Muskegon, Michigan but grew up in Boca Raton, where he and his brother were discovered by a casting agent at age 15 while riding bikes around their neighborhood “I was a gawky teenager with bad acne and even worse hair,” Rutherford says. “I’m sure what they saw at the time, but they believed in this ‘diamond in the rough.’” They sure did! Eric’s ugly duckling days were officially over, and a successful modeling career began. He would spend the next 15 years shooting catalogs, commercials, fashion ads as well as editorial projects (one of his favorites was a shoot for W with photographers Mert & Marcus, which featured 40 other models, 50 racks of clothes and thousands of shoes) for the biggest magazines and brands.

At the same time, he began to pursue acting and was accepted into the University of Southern California’s prestigious BFA theater program at just 17, which he says was “the first time I truly felt talented and that I had something to offer.” Though he achieved success, he also felt the cruel reality of that world begin to creep up when he turned 30, as a lot of models and actors often do. “That’s when I left the industry,” he says, noting “I began to doubt my talent and my self-worth. When you work hard, treat people with respect and kindness, you find success. In both the acting and modeling industry, this isn’t always true.”