A Return To The Bad Old Days

Hold on to your hats, Kids…this month’s edition of “A New York Rant” is going to be a doozy!

We are under attack, my fellow Gothamites. No, not from a foreign state seeking global domination nor a street gang angling to take over more street corners. We are under attack by our own “elected officials,” hell bent on only furthering their careers and agendas no matter the cost to the People. Sadly, that includes a marked return to the bad old days of the 70’s—mid-90’s of our fair city.

A NEW OUTRAGE
We can all thank our dear lame duck Mayor Bill de Blasio, the entirety of the City Council, and Governor Andrew Cuomo for this. Why? NYC is facing a historic rise in crime across gun violence, homicide, burglary, and rape. With calls to “defund the police,” NYPD Commissioner Dermot Shea disbanded the Anti-Crime Unit (largely credited with bringing gun violence under control in NYC). At the same time, our police are under fire from activist groups like Black Lives Matter, our politicians are calling for even more cuts to law enforcement. Yet, every day there is a new protest or new outrage in our city. And, with alarming frequency, this outrage turns into violence. Look, I am the last person on Earth to stop someone in this country from speaking their mind or expressing their views. We have a Constitutional right to free speech. It is in the DNA of our Republic and engraved on the hearts of every American. But, when that expression of free speech turns violent or into a riot, all bets are off.

Let’s take this last month as a prime example of what I mean. Warren Wilhelm, Jr. (a.k.a – Mayor Bill de Blasio), someone only BORN in New York who grew up primarily in Boston, announced that he does not support “defund the police.” When I read this, I was stunned. But, of course, shame on me for having faith in City Hall. Less than two weeks later, Mayor de Blasio then flip-flopped (like he does on everything) and supported cuts to the NYPD budget. To make matters even worse, my sources inside City Hall have told me that the Mayor is playing political hot potato with several City Council members as revenge for them voting against some of the Mayor’s pet projects.

Let’s look at Hell’s Kitchen as an example where the highest concentration of “homeless hotels” exist. City Hall did not inform City Council Speaker Corey Johnson (who represents this district), nor the three NYPD precincts that protect and serve this neighborhood until the day after the homeless and former prisoners were bused in. Since then, we have had ambulance after police car being called at all hours of the day to take care of an overdose, assault, or theft. So, for those who are defending the action of housing 15,000 people (mostly men) in these hotels, and claiming they are the most vulnerable, perhaps you need to speak to the residents of Hell’s Kitchen. While the homeless and former Riker’s inmates are enjoying air-conditioned comfort in the overnight after a hard, long day of drinking, drugging and mayhem, resulting in a broken neighborhood confronted with endless violence, theft and graft, residents are fleeing the city in droves not seen since the Depression. 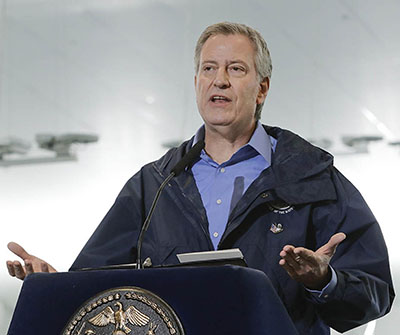 THE GREAT EXODUS
And who is paying for all this fun that the “indigent” are enduring while we suffer under unemployment, empty storefronts, and a lack of city services thanks to budget cuts (again, thank you Mayor de Blasio)? The taxpayer! In the infamous words of my old friend Billy Mays, “But, wait, there’s more!” The State of New York is reporting that over 400,000 of our fellow Empire State residents have left, most of that departure pattern coming from New York City. That amounts to roughly 5 percent of the total population of the Big Apple, resulting in a massive loss of tax revenue to the state and city. Thankfully, FEMA is covering 75 percent of the housing costs for the “homeless”, but that leaves 25 percent to a city that is, for all intents and purposes, on the welfare line already.

What is the purpose of all of this? Bill de Blasio’s unending ego getting a stroke by destroying the very city he claims to care about? After all, this is the man who stated in the last few months that he has the strongest mayoralty in U.S. and New York history and that we are better and safer for having the lowest prison population since WWII. Really? Then how do you explain an embarrassingly low poll record for the Mayor and the historic surge in crime? You can’t. Just like you can’t tell us where the $850 million for ThriveNYC was spent, or why you have violated the law putting sex offenders one block from public schools in several districts where the “homeless hotels” are.

Remember, the Mayor promised the city would not return to the bad old days. He lied, again! And he knows it. I smell a lawsuit against Bill de Blasio and his wife once they leave Gracie Mansion. One can hope accountability finally returns…