One of this country’s greatest Statesmen, and a Founding Father of our great nation, Thomas Jefferson, once wrote, “A little rebellion now and then is a good thing.” Little did he know, as he penned a letter to James Madison from Paris, that this quote would be even more relevant some 233 years later.

Yes, my fellow New Yorkers, a little rebellion is certainly needed right now in New York. With both Mayor Bill deBlasio and Governor Andrew Cuomo, we have been “ruled” by a deluded, self-aggrandizing, woefully corrupt totalitarian regime for far too long. What was promised by Cuomo as transparent and fair governance in Albany has been anything but while DeBlasio continues to believe his own lies.

By now, you are asking, “why is he saying, deluded?” Well, if you read the Governor’s new book, American Crisis: Leadership Lessons from the COVID-19 Pandemic, you would know exactly how delusional this phony would-be Emperor is. Cuomo places the blame for the over 11,000 senior deaths squarely at the feet of both the New York Post and President Trump

Um, how is that even remotely possible? Cuomo made the decisions for New York State during the lockdown, not the NY Post or POTUS. Yet, people will believe this malarky. Why is the Governor doing everything he can to block an investigation into the senior and nursing home scandal?

Had enough? Yet another controversy hit Albany in the form of the Governor’s failed rent relief program where hundreds of thousands of New Yorkers are still suffering and will likely be evicted from their homes—all while the would-be Dictator was on LIVE With Kelly & Ryan promoting his tome. Yeah, because Cuomo cares about the people. Sure

As to Mayor deBlasio, my fellow Gothamites are all too familiar with my feelings for this lowlife. However, that may be too kind a description for the man who is solely responsible for the rabid crime rate, homeless epidemic, and utter failure the school system is experiencing in “re-opening.” Frankly, I imagine a trip to McDonald’s would involve less heartburn than what this fool has caused

Bear in mind this is not the first time New York has been faced with this level of inadequacy or politicization, lest we forget names like Robert Moses, John Lindsay, et al. It took New York City 25 years to recover from the failed “progressive” policies of the late ’60s through the ’70s that led to historically high crime rates. So, I say it is time to rebel against the two administrations whose decisions have destroyed the progress and growth our great state and city have experienced over the last three decades. It is time to rise and say Enough Is Enough! Or, in the spirit of the Queen of Hearts in Alice’s Adventures in Wonderland by Lewis Carroll, I say “off with their heads!” 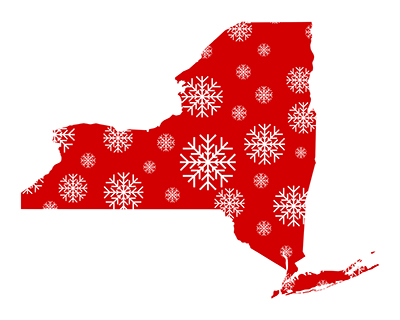 Yes, I am that guy. I am sick to death of the politically correct nonsense that makes no sense whatsoever. How is it insulting to wish someone a Merry Christmas? How is it wrong to say Happy Hanukkah? It isn’t! But the progressives and politically correct would have you believe otherwise.

Judeo-Christian values promote inclusion, understanding, and love. As well the real Koran (not the bastardization of this holy book that would-be Islamist terrorists use to divide and destroy). So how does it make sense that wishing someone glad tidings in their own faith’s way is offensive? Truth: It doesn’t!

I stopped saying Happy Holidays years ago. Why? Because I was PO’d by the obnoxious, self-righteous ass-hats, who try to tell everyone what to say and how to act. Enough already. I am not insulted when someone says, “Happy Hanukkah” or “Happy Kwanza.” I am honored that they think enough of me to wish me well in their own faith’s way during a high holy season. That is being an adult. That is being an American. That is being a real New Yorker. Don’t be fooled, kids, the politically correct are out to ruin Christmas, Hanukkah, and every other celebration that brings people together. It’s time we stop the nonsense and remember that the holidays are meant to be a time of unity and love, not politics and division.

So, I say Merry Christmas and Happy New Year to all! Thank you for an incredible start to A New York Rant in New York Lifestyles magazine.