A Conversation With The Artist 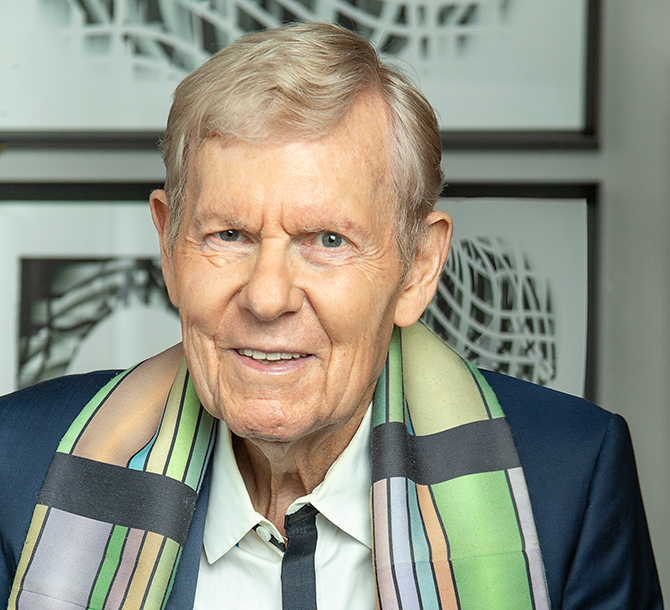 Jacques Lieberman’s brilliantly hued artworks are unique and have won him a huge and appreciative audience from the artistic world. However, it was not the easy journey for this incredible talent. A Jewish refugee from Antwerp, Belgium, Jacques escaped to several countries before landing in Brooklyn in 1959, where he enrolled in school to study architecture 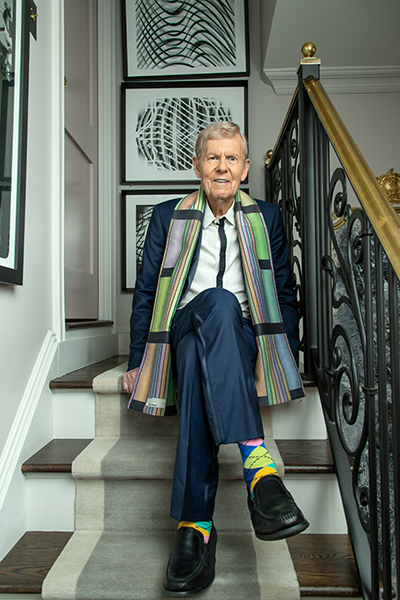 He later moved to Manhattan and continued his painting. His works were well-received. With this success he quit his job to become a full-time artist and gallery manager. Then, in 1988, the revolutionary Adobe Photoshop was introduced. Jacques quickly realized he could use the same color palettes and geometric design capabilities to create colorful art in a fraction of the time it took him to create a painting. His prints caught the attention of many art lovers. In fact, Jacques is one of the first artists to usher in the digital age of art.

Today, Jacques Lieberman enjoys his career successes with his wife Maribel (of MarieBelle Chocolates) and his daughter Angelina. New York Lifestyles sat down with the artist to learn more about his fascinating life and what he sees for the future.

Tell us about your childhood years in war-torn Europe and your move to Israel.
I was born in Antwerp, Belgium, and quickly became a young Jewish refugee of the Second World War. My parents fled to Puisserguier, France, in 1940. Soon after, when the Nazis invaded, my parents decided to send me away with an underground network of French people hiding and protecting Jewish refugees throughout the country. At the age of six, I kissed my family goodbye. It was the last time I would ever see them. I spent the war years with a French Protestant family who hid me. After the war ended, I moved to Switzerland, where I reunited with cousins and other relatives from France. After four years, I moved to a Kibbutz in Israel.

Yet another move. This time to New York City, where you call home. What were your first impressions when you first arrived?
After ten years in Israel, I came to New York to study architecture and design at Pratt Institute. My interest in art grew, and I heard that many artists established their studios in Soho; therefore, I wanted to see what it was all about. Soho was where I opened my first gallery and has been my home ever since. I still believe that Soho is one of the most artistic neighborhoods in New York City.

What were your earliest memories and your exposure to the arts?
When I was hiding in France, my family, who adopted me, gifted me a box of colored pencils. Gifts were not common in the household, so I was static about this gift. Every day I would sketch drawings that expressed the fear I felt. The drawings were my only outlet; my parents were gone, I was alone, hiding, wishing I could live a normal life. Art was the one thing I could hold onto after everything was taken away from me. Everywhere I went, I held my box of colored pencils. When my daughter turned five years old, I gifted her a box of the same colored pencils, passing on my passion for art.

What was your inspiration in starting Rinna Beauty?
It really started with people asking me what lip color I was wearing and where I could get it. And I thought, well, why am I not making my own.

You started the full lip trend before anyone else—Angelina,Scarlett, et al. Did you know that you would be a trendsetter when you started your career in the early 90s?
I did. And I say that with a wink and a nod when I say that I’m the lip pioneer. But when I was 24 years old, I went with my girlfriend and we had our lips done, and it was crazy—nobody was doing it.

Unlike other celebrities, you’re intimately involved in creating Rinna Beauty and all its products. Was that a condition in starting the line?
Absolutely. I really think long and hard about it. When I created my clothing line for QVC, I still made sure that I made it authentic to myself. You can’t just put your name on something unless it’s fabulous!

Was there one person who influenced you the most?
Victor Vasarely was my biggest influence. He taught me that art did not have to be representational but rather abstract and contemporary. His use of geometric shapes was fascinating and impacted the Op Art movement. I identified with his art, and I would do anything to go back in time and thank him for inspiring me into the artist I am today.

When is your favorite time to create art?
When I first began painting, I would wake up at 5 am and start creating colorful shapes on huge canvases. It was the best way to start my morning. When Apple introduced the Macintosh, I was one of the first artists to use that computer with Adobe Photoshop, Illustrator, and Painter to create art. I was addicted to it; I would work 18 hours a day, starting at 2 am. Once I even worked for 24 hours straight. Art is the best way to start the morning.

How would you describe your art?
My art doesn’t represent anything other than itself. I can’t even describe my art or replicate it. Every piece is unique. That’s why I love it.

Today, artists are going down other avenues to showcase their works—including exhibiting at hotels, restaurants, and other venues. Have you ever considered this?
What’s interesting is until now, I have never promoted my art. Art is my passion and creating always came before selling. The fact that people want to see my art is incredibly heartwarming because I create art for people to love and be happy when they see it.

Tell us more about today’s art scene in NYC?
Most art galleries moved from Soho to Chelsea; many young artists are extremely talented and make me excited for the next generation of artists in New York City. Although many galleries have moved, I still believe Soho is as artistic as it was in the ‘80s and ‘90s.

What are your inspirations / reference points for creating art?
I adore shapes of all colors and sizes. With my background in architecture, I have learned about lines and how specific shapes complement each other. I love creating abstract art that doesn’t have a deeper meaning.

What is your ideal studio setup? Is it small and confined? Or an airy loft-like situation?
My ideal studio setup is a large New York City loft, with huge windows—there needs to be light. All I need is a desk and a computer, no furniture, I need a space where ideas can flow.

You don’t leave home without…
My pug, Willow.

What book are you reading now?
Presently I’m writing my own biography. 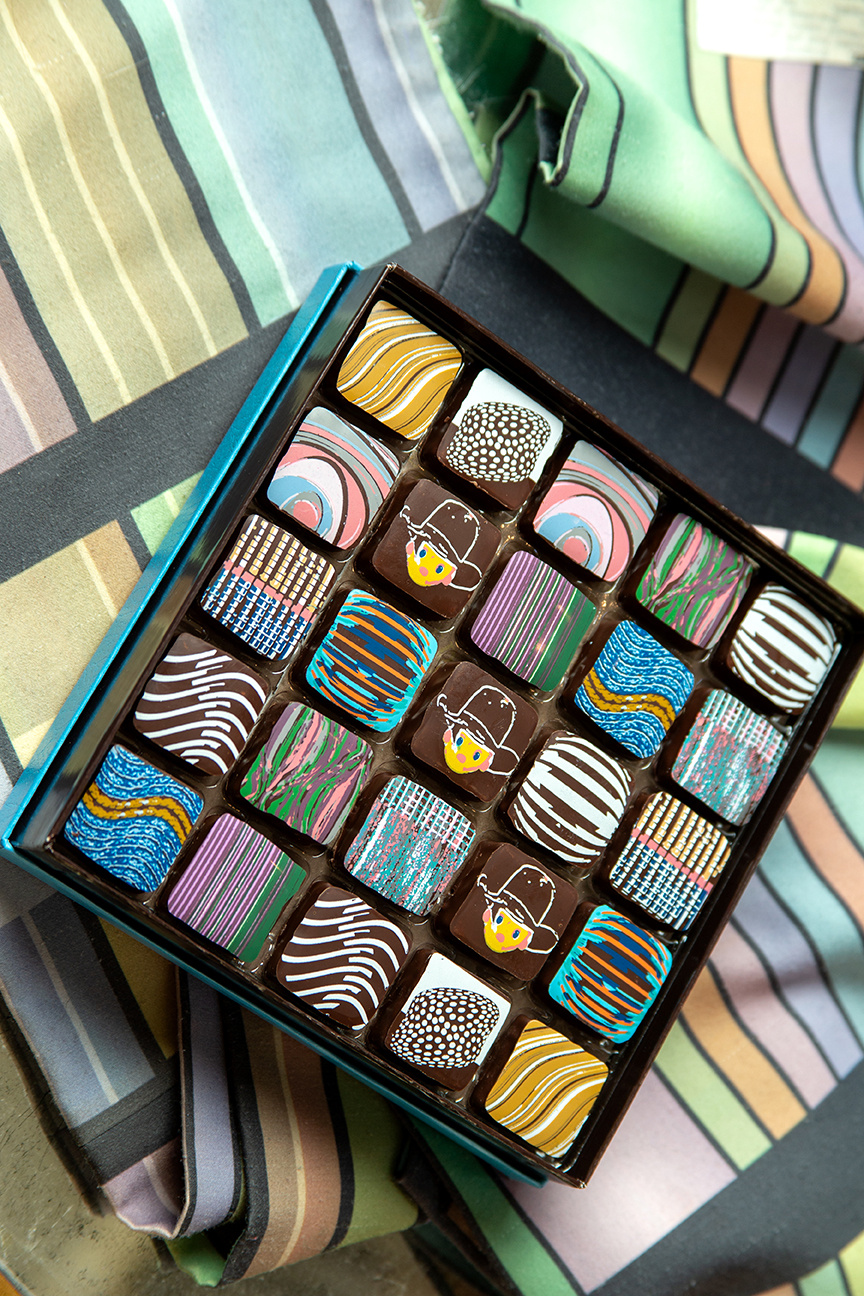 What projects are you presently working on?
I am working on my own collection of silk and wool rugs handmade by village artists in Katmandu. The collection will depict my works of art. I am excited about this project. Not only am I using a different medium but it is a team effort with artists from Katmandu who have made the thread from scratch dye to fabricate the rug. I am also doing a collaboration of my art with MarieBelle Chocolates. My art will not only look beautiful on chocolate, but one will be able to taste it!

Your wife, Maribel, of MarieBelle Chocolates is the famed chocolatier with her signature artistic designs. Does your daughter, Angelina, show any artistic endeavors?
Art is an extremely important trait in our household. My daughter Angelina is an incredibly talented and dedicated pianist with over 11 years of experience. It is a family tradition to paint together once a week. It connects our family, especially in these uncertain times. I am blessed to have a wife and daughter who are both extremely talented and love the arts.

For more information on Jacques Lieberman and his art,
visit Jleditions.com