New Yorkers wanting to sing like their favorite Broadway stars need only look to Katy Wolfe, one of the theater’s most in-demand voice coaches and an actor. Through her three decades working in the performing arts, Wolfe has developed a roster of students on stage and screen, including Tramell Tillman (Apple+’s Severance), Ellen Reid (Prism, which won the Pulitzer Prize for Music), and theater performer Quentin Oliver Lee (national touring of Phantom of The Opera), among many others.

BUILDING A COMMUNITY
In April, a standing-room-only crowd filled the performance space of The Players, the venerable Gramercy Park social gathering place for the artistic set. Performing that night was a complete program of Wolfe’s students in the cabaret “Singer’s Therapy,” produced by Wolfe and her team, including husband David A. Brown.

Through the many students Wolfe has trained, a community has developed—made only stronger during the pandemic. But unfortunately, the shutdown suspended the ability to assemble and celebrate live performances, hence the “therapy” of the program’s title. “We have yet to see the full ripple effects of the pandemic on the performing arts,” Wolfe says. “The decreased amount of art being created translates to fewer opportunities for artists. I am concerned about the devastation this has brought on our craft and industry.”

IMPROVING SKILLS
Wolfe is also an in-demand consultant for business leaders seeking to improve their presentation skills. “I work with CEOs and attorneys wanting to be more in-command and persuasive, which is achieved through connecting their body to their voice and breath,” Wolfe says. “It is enlightening to them, and they are eager students because they recognize the impact it will have professionally.”

Also, an accomplished actress, Wolfe has appeared in some of opera and musical theater’s most beloved works, including Don Giovanni, The Threepenny Opera, and Kiss Me, Kate. She cites Marian the Librarian from The Music Man as one of her favorite roles and calls the musical “about as perfect as a show can be when done well. It suited me and sat perfectly in my voice.” 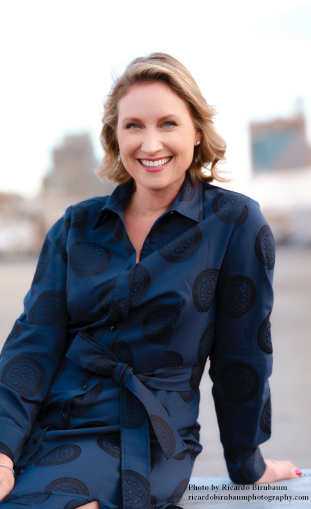 The Ohio native grew up in a home where music genres were a constant sound. Her mother, a piano teacher, encouraged her to develop her talent. “I grew up singing in school and church, so I went to college to continue that learning, then wound up with a master’s degree in opera,” she says. Ever the enthusiast for live performance, she believes, “You have to have an audience to create art. The story doesn’t come together until there is someone there to listen.”