Time To Drink The Other Spirit From Mexico

If you’ve been out and about this summer, perhaps enjoying cocktails on one of New York’s fabulous rooftop terraces or simply having dinner outside your home, then you’ve probably noticed a Mexican spirit making a big splash on the cocktail scene.

That’s mezcal, the agave-based quaff that is not tequila, the one that the indigenous people of Mexico have been fermenting since before the Spaniards came to their land. The Spanish brought distilling to that place which eventually became known in the USA as “south of the border,” where tequila and mezcal have been enjoyed for generations.

Tequila is a mezcal because mezcal is any agave-based liquor, but mezcal isn’t tequila. Both are made from the agave plant’s pina, but tequila must be made from only the blue weber agave (agave tequilana) and is steamed in industrial ovens and distilled in copper pots.

THE SACRED AGAVE
Mezcal can be made from many agave plants, the most common being Espadín, and other main species used include Cupreata, Cenizo, Sierra Negra, and Tobalá. Each species has a different flavor profile, the commonality being mezcal’s traditional smoky notes. That distinct taste comes from how the piña (heart) of those agave plants must be fire-roasted in pits or ovens to be converted to alcohol via distillation in clay pots and copper stills or stainless-steel tanks.

Like its cousin tequila, mezcal is aged in oak barrels and has varying levels of aging. You’ll find Joven (aged only 0 to 2 months), Reposado (2 to 12 months), and Anejo (one year or more) ratings for mezcal, with the longer-in-oak mezcals yielding up the smoothest tastes. Mezcal is often served in traditional small clay cups and sipped neat in Mexico. 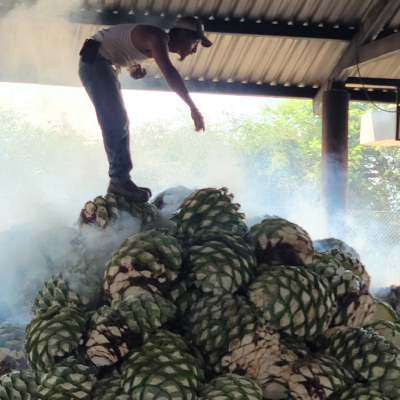 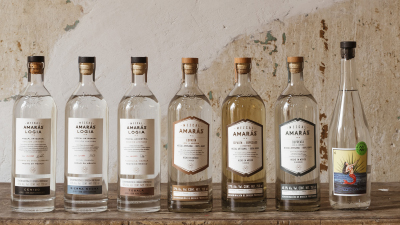 MEZCAL AMARÁS
On a recent visit to Oaxaca, we explored the agave fields and distilleries of Mezcal Amarás, one of the award-winning brands of this fascinating spirit. Growing their 12 species of agave organically, both on their farms and in collaboration with smaller farmers, Amarás produces small-batch special bottlings called Logia from wild agaves like Tobalá and Cenzio, larger distillations of Espadín and Cupreata agaves.

Each type of Mezcal Amarás has a distinct flavor profile, partially because of the uniqueness of each agave species used in the spirit and partly because some (particularly the Logia limited-edition line) are handcrafted using traditional and artisanal methods to create the mezcal. Those make for perfectly smooth sipping mezcals, with intense flavors ranging from citrus to herbal, and all with the trademark smokiness that makes mezcal so unique. Those bottles range in price from about $85 to $150.

The multiple award-winning Amarás Espadín ($42) is also sippable, full of smoky roundness and cinnamon, or combined with Aperol, Yellow Chartreuse, and lime juice for a tasty cocktail. The Espadín Reposado ($52) spends three months in oak barrels and comes out with a nutty vanilla flavor. At the same time, the Cupreata ($63) is made with 13-year-old agave plants, has notes of pumpkin and spice when tasted neat, and makes for a delicious cocktail when mixed with cucumber water lime juice, and agave nectar.

And take it from me, someone who has called tequila “ta-kill-ya” for decades and avoided it at all costs after a couple of bad tangles with it. Mezcal and tequila are very different spirits from the same plant genus. And for those of you who think of mezcal as that Mexican spirit with the worm in the bottle, those gusanos are moth larvae and are only found in about 8% of mezcals these days, for as artisanal, high-end mezcal becomes more and more sought after, the “worm” has disappeared. So mezcals are ready to take their rightful place on the top shelf, next to the best tequilas. So why not give one a try? You might agree.

For more information about Mezcal, go to mexcalamaras.com