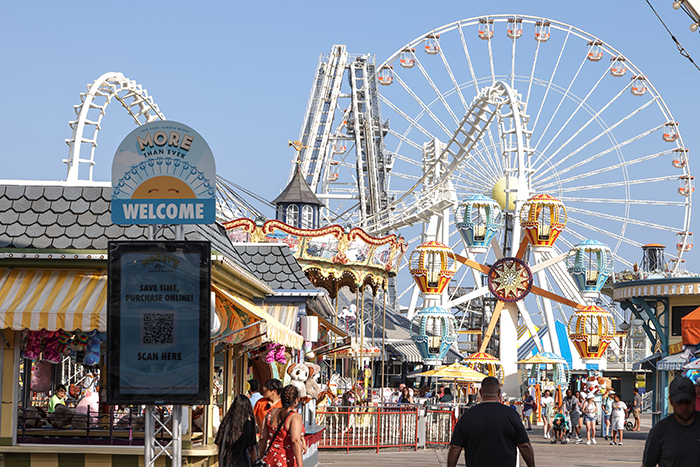 A WALK ON THE WILD SIDE

It all started 50+ years ago with a slide. Today, it has grown to three piers, including two waterparks (and 22 waterslides) and an endless number of rides. This is Morey’s Piers, a Wildwood staple that has made this destination the go-to place for summertime fun.

As co-owner Jack Morey and his brother, Will told us several years ago, the only way to describe Morey’s Piers is that it’s forged by the sand, sea, sunbeams, and American dreams some three generations later. The brothers, feel it is a great joy to see families come to visit summer after summer, making memories that will last a lifetime.

Back in 1969, the Morey name was not recognized as it is today. If anything, their business in hotels and motels is what would have been associated with a Morey’s mention, if known at all. But then, brothers Will and Bill Morey noticed something new in modern recreation while at a shopping center in Florida. Taken with the crowd’s reaction to a giant slide, the pair surmised it could be popular at their home in New Jersey. So, after acquiring two strips of beach real estate in North Wildwood the Wipe Out slide was built and became a summer sensation. That was the beginning…

EXPANSION WAS KEY
During the 1970s, several amusement piers were decorating Wildwood’s beachfront. But those Morey upstarts were most likely not considered to be any competition. Expanding the dock around the slide, the Morey brothers added a mix of rides to keep visitors close for extended periods. They appealed to both families and thrill-seekers with offerings for both. Soon the pier, now known as Morey’s Surfside Pier, was the hot ticket in town. And the subsequent purchase of Marine Pier late in 1976 fueled the ambitious growth. Renamed Mariner’s Landing, the second pier was a statement that the Moreys were a force to be reckoned with.

In the following decades, the beachfront underwent some changes. Many amusement piers were closed owing to either misfortune or a decrease in popularity. But the Moreys took the leap and invested in roller coasters, a giant Ferris wheel, and more big rides followed. The brothers kept their properties relevant. More rides and success followed.

Then in 1998, Will Sr. passed away. His sons Will Jr, and Jack spearheaded the business and continue today. Along the way, Wildwood has become a year-round destination admittedly with the help of the Moreys 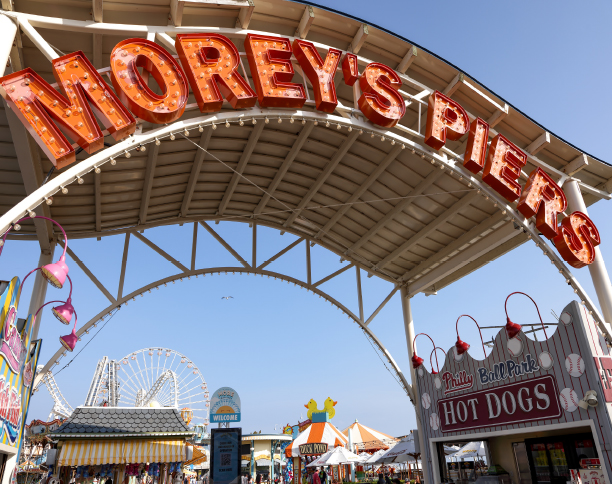 Who would have thought that a little fiberglass slide spotted in a parking lot in Florida would inspire two brothers to enter a business about which they knew absolutely nothing? Fifty+ years later, they’ve added more bells and whistles but remain true to their mission: to provide a spectacular family recreational experience in an exceptionally safe, clean, friendly, and unique environment.

Now in its third generation, we recently visited Morey’s Piers to become acquainted with Will and Bill’s grandkids. New York Lifestyles caught up with them recently to find out what’s happening at Morey’s Piers.

We sat down with the newest generation to find out about the past and what they see for the future.

How many days do you recommend families need to experience what Morey’s Piers is all about?
Kyle Morey: It depends on what they’re looking for, but I would say 3 to 3.5 days would be enough to really experience most of what we have to offer. You could certainly ride all the rides much faster than that, but to really experience Ocean Oasis and Raging Waters for example, it would be better to spend a day at each to be able to spend some time lounging at Stubborn Brothers overlooking the ocean with a frozen drink as well as to experience the newly renovated and expanded deck at PigDog with their Trash Can Nachos and MOAB Bloody Mary.

Why do you think visitors return year after year?
Will B. Morey: We’d be silly to think that people aren’t coming to the Shore to go to the beach.  The beach is the main draw, but our water parks offer an alternative to just going to the beach everyday (did I mention the cabanas?) and the piers are a great outdoor night activity for families.  It is also extremely generational.  People have fond memories of vacationing at the beach and spinning around our rides at night.  It’s the kind of thing that you remember fondly.  So fondly that you want your kids to have the same experiences.

Are all three Morey’s Piers the same?
Jordan Morey: They all have their similarities but certainly have their differences as well. Mariners has the longest season, so it naturally is the most action packed and the most iconic. Surfside is like Mariners but it has a wider footprint, so it spaces itself out more. Adventure Pier is equipped with our extreme rides, so I’d say that’s for our thrill seekers.

How do you see Morey’s Piers in five years?
Zack Morey: Fine Tuning. With the exception of Adventure Pier, our marketplace and seasonal nature only provide for so many opportunities for growth. Five years from now I hope that we will have more effectively branded all our different entities into a more overarching entertainment, food/beverage, and hospitality company, with greater brand awareness. Aside from guest experience, I expect that we will continue our efforts to acquire workforce housing and evolve our workplace practices to continue to be an attractive place for Cape May County residents to develop careers with us.

SLIDES & RIDES
Morey’s Piers doesn’t disappoint. It offers more than 100 rides and amusements on three piers. But that’s not all. Look for two waterparks that will thrill with slides and ride.

• Mariner’s Landing Pier features a traditional amusement park experience with Teacups and Super Scooter rides and a giant Ferris Wheel. Arrive early and treat the kids to a one of a kind thrilling experience—breakfast in the sky. Enjoy a white tablecloth breakfast served inside a Ferris Wheel car!

• Surfside Pier provides a right mix of rides for kiddies and older children and adults. Kids will delight with the neon-lit carnival atmosphere on this pier.

• Adventure Pier is, as you may have guessed, is where you’ll find the genuinely extreme rides like the wooden Great White Coaster and the Grand Prix Raceway.

• Raging Waters Waterpark, located behind Mariner’s Landing Pier, is where one and all enter to be transported to the land of pirates. Here families can enjoy shipwreck-themed play areas, rope swings and plenty of waterslides.