From the moment you arrive, you realize that you might get run down by a bicycle—one ridden by a fast-moving mother with two small children in a rolling carrier attached to the front of her bike. It’s evident Copenhagen is not like most American cities (and certainly nothing like New York!). Founded in 1167 and the capital of Denmark since 1445, it’s an old-world beauty juxtaposed against sleek modernity. 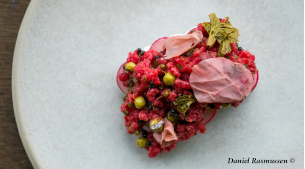 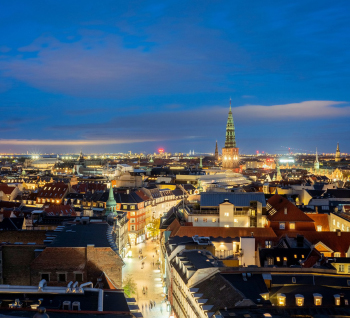 To experience the local eating scene, use GetYourGuide.com to book the Scandinavian Delights Food & Drink Private Tour. Your guide will give you a three-hour deep dive into what the Danes eat daily. And while the hot dog served at a street stand (which is as iconic here as in NYC) may not float your boat, one bite of the open-faced, piled-high Smorrebrod sandwich (choose fish, meats, or other ingredients) is bound to satisfy. And Danish pastries? Sublime.

CULTURE & AMAZING VIEWS
Combine architecture, culture, incredible views, and more tasty food with a visit to the Christiansborg Palace, the royal residence, as well as the seat of the Danish parliament, on Slotsholmen (Castle Island) right in the heart of the city. This third iteration of the palace was completed in 1928 after the fire destroyed it twice once it was built in 1740. Tour the Queen’s lavish royal reception rooms, see the royal stables and kitchen, then head to the very top for a meal at The Tower. Finally, enter the King’s Gate to experience both stunning views of the canal-filled city and the delicious Nordic-centric cuisine served here for lunch and dinner.

If you purchase a Copenhagen Card, a terrific deal that allows unlimited public transport and admissions to numerous museums and other attractions, admission to the palace is included. Use it for the National Museum, a canal boat tour, the Tivoli Gardens Amusement Park, and other famous sights. Don’t miss the thrilling architecture around the city, from the modern Opera House, the DR Koncerthuset, and the Black Diamond Royal Library to the more ancient Børsen, the Round House, and Frederik’s Church (all built in the 1700s). The Cultural District boasts seventeen museums within a 10-minute walk, so wander there for hours. 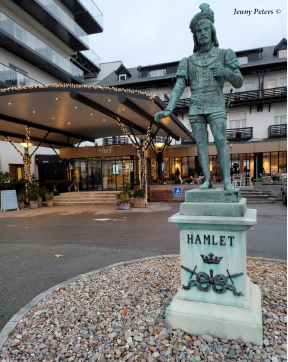 WHERE TO STAY
Copenhagen has numerous hotel choices within a leisurely walk (or bike ride) to the city’s main sights; we liked the new five-star NH Collection Copenhagen for its sleek modern style, spacious rooms with harbor views, and those views paired with tapas and cocktails at Tablafina restaurant. Another new hotel is the Villa Copenhagen, with the Central Train Station and Tivoli Gardens right out its front door. Built in the old central post office, the hotel features a rooftop pool and a glass-ceilinged lobby with an energetic bar scene.

For the ultimate five-star treatment, opt for the Hotel d’Angleterre. This elegant place dating to 1755 is still in the center of the city, with a breathtaking structure with modern suites and rooms (fully renovated in 2013). Whether you stay at the d’Angleterre or elsewhere, take the time to sup at Marchal, their Michelin-starred restaurant on the ground floor. Between the excellent service, lovely ambiance, and incredible food (dishes intertwined with caviar, truffles, lobster, and other sublime elements), Marchal is a gastronomic wonder.

GETTING THERE
Getting to this action-packed city is accessible from the New York area via Scandinavian Airlines out of Newark, with its frequent nonstop flights, comfortable lounge (accessed with bookings in Plus or Business class), and expert service onboard. SAS flights will get you to Copenhagen in less than eight hours and help put you in a Scandinavian frame of mind, with food and service reflecting the Nordic way.

THE SOUND, THE SPA & HAMLET’S CASTLE
It’s an easy hour train ride north to Helsingør, where Shakespeare and English speakers call Elsinore, where Kronborg Castle doubles for Hamlet’s melancholy home. Of course, that famous Dane was fictional, but the sturdy Renaissance royal castle is the stuff of reality. Take a guided tour of this UNESCO World Heritage site, a fortress that protected Danish interests along the key Nordic waterway known as The Sound, the gateway to the Baltic Sea. It’s a history lover’s dream place, so plan to spend the afternoon there as you climb through the various levels of the castle originally built by King Frederik II in 1574.

Stay on to enjoy the picturesque town, founded in 1420. Look for MOS, the newest restaurant on the town square, where local sourcing results in fresh, lively flavors, then check into Marienlyst, the famed beach-spa hotel perched right on the edge of The Sound. Soak in views of Sweden across the channel, take the waters and indulge in spa treatments, and do not miss the winning blend of French and Nordic cuisine with a five-course meal in 1861, the hotel’s exemplary restaurant.